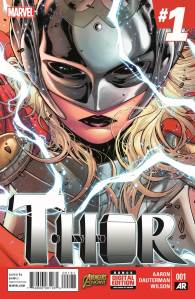 The newest arc of Thor begun last week with Thor #1 releasing Wednesday. Jason Aaron is still on scripting duties and he is joined by artist Russell Dauterman, colorist Matthew Wilson, and letterer Joe Sabino with Dauterman and Frank Martin doing cover art. in the project. Usually number 1’s mean “Jump on here it’ll be okay!” But is that the case for Thor? Well I, your humble resident Asgardophile, am here to tell ya.

Following the cold open of the book there’s the title page and here I will copy for you the primer text, the Star Wars opening Scrawl if you will.

“Change has come to Asgard.

After a self-imposed exile, Odin the All-Father has returned to his former kingdom (now called Asgardia). But his wife Freyja, who had been ruling Asgardia in his stead as the All-Mother, has no intention of letting things go back ot the way they were before Odin left.

The biggest chance, though, is that their son Thor, the God of Thunder, now finds himself no longer worthy of wielding Mjolnir, his enchanted hammer. In a recent battle on the Moon, superspy Nick Fury—empowered with secrets he stole from The Watcher—whispered something that caused Thor to drop Mjolnir to the Moon’s surface, where it has remained ever since. No matter how hard he tries, Thor cannot lift it.

With the leadership of Asgardia uncertain and Thor now in a severely weakened state, it is only a matter of time before the enemies of Asgard strike, bringing doom to both the fabled realm and Earth itself.”

Does that alone really fill in everything you need to know? Close. The battle on the Moon took place during the Original Sin event that I still haven’t caught up in, it certainly didn’t happen in the first 25 issues of Aaron’s run on God of Thunder. But that didn’t throw me for a loop, it’s explained in the intro and again when it actually comes up in this issue. Aaron’s run of Thor has never had those crossover issues, being entirely self-contained adventures the God of Thunder ended up on in-between those team books and events, something I particularly enjoy.

The number one thing I’d say is that this isn’t really a relaunch of the series, just a renumbering. A second season if you will. It follows, continues to reference and play off Thor God of Thunder. This could just as easily be Thor GoT #26 as opposed to Thor #1. I’m sure the distinction will become much clearer as the story finds its footing.

And here begin the spoilers.

The cold open find Frost Giants attacking an underwater Roxxon base in the Norwegian Sea. If you’ve been following Aaron’s run so far, you already have an inkling about what’s happening here, but nothing is explicit. They appear deep on the seafloor and begin their assault.

The story cuts to “THE MOON. IN THE SHADOW OF ASGARDIA.” Man doesn’t that locator just get you juiced?! Here we find a cast of Asgardians grouped by a disheveled, more so than usual, (and shirtless) Thor who is kneeling at Mjolnir. It seems Asgard’s favored son can no longer lift his hammer, and that is a worrisome state. But hey, at least he’s grown a beard again? Odin has returned from exile and is none too pleased, his usual grouchy state. After some bickering between the All Father and Mother it is let slip that Frost Giants are attacking and Thor makes for Earth. We end on Freyja looking up Mjolnir knowingly…

Back at the SeaLab Malekith the Accursed appears for some exposition work letting us know that Roxxon found something in the deep and the Frost Giants want it back. Thor charges into battle on one of his mighty goatsteeds, either Toothgnasher or Toothgnawer, could be another mystic goat I suppose, and wielding Jarnbjorn, Wrecker of Worlds, his Dwarven forged axe capable of cracking Celestial armor. (If only some of those words make sense, that’s fine, stick around I swear you’ll learn your Thor well.) 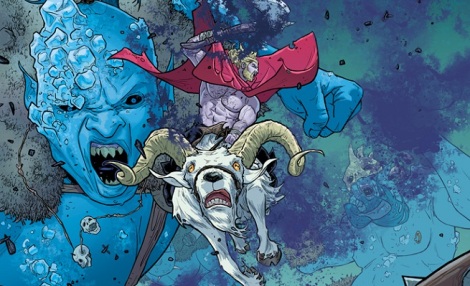 In the battle Malekith disarms Jarnbjorn from Thor’s grasp and then, well, disarms Thor. We exit SeaLab with three panels, Malekith and the Frost Giants have found what they came for while Thor’s severed left arm drops to the floor, and Thor falling deeper into the sea, the caption “We have seen the last of Thor.”

The final page takes us back to the moon where we see Mjolnir buried in the moondirt. In silhouette a woman says “There must always be a Thor.” Reaching down she grasps the uru hammer’s hilt and energy begins to crackle, the inscription changes: 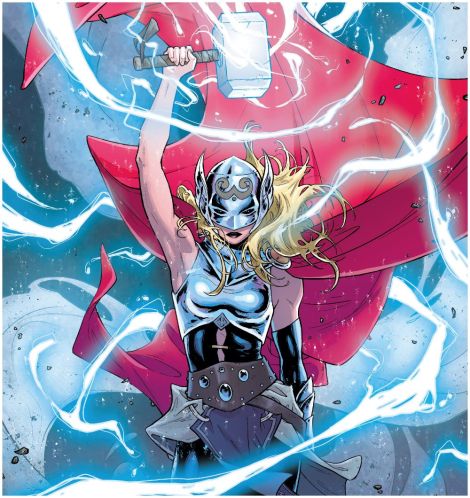 Though there are a few clues throughout the issue we can’t say for certain who it is. I have my guess but I hope I’ll be tripped up yet. Issue #2 is supposed to be new Thor heavy, so more clues lie in the future fellow Midgardians!

Final Thoughts—
Check this book out! If you’re at all a fan of Thor this book continues on one of the most metal runs of the Thunderer of all time. If you’re new to Thor and wanna hop onboard, pick this issue up, it is entirely readable solo but I’d recommend you start filling in the back story with Aaron’s previous 25, beginning with the God Butcher arc, for the full experience of the story. You will not regret it.

One response to “Thor #1 Review: If She Be Worthy…”