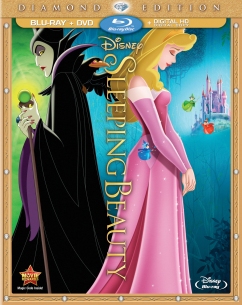 I watched Sleeping Beauty for the first time in what has probably been two decades over the weekend. It’s incredible how much you forget about a movie like that with time and how much of it just comes rushing back in a moment of nostalgia. Lately my only real exposure to the story of Princess Aurora and the Sleeping Beauty film had come from seeing Disney Princess merchandise in stores, what’s featured in the Kingdom Hearts series, and Once Upon A Time. I know, I know. I didn’t go back to the source material during any of that. But with how often Disney classics go back into the vault can you really blame me?

These days you hear a lot of bad things about princess movies but, honestly, to me Sleeping Beauty was just a cute animated fairy tale. I thought I was adorable and I loved every minute of it.

It’s almost hard to believe that this movie was first released in 1959. The quality of the animation is striking and the storytelling just screams Disney. So many of the jokes are timeless – like Phillip exclaiming that “It’s the 14th Century!”when his father starts talking about his arraigned marriage  – and the story itself has just the right amount of action, adventure, and emotional draw to keep you interested all the way through.

I’m not going to lie, I didn’t expect to love the movie itself. But I did. And I am so glad that Sleeping Beauty was re-released on blu-ray before Disney’s live action Maleficent which comes out early next month. I didn’t get a chance to see Maleficent while it was in theatres and so I was planning to pick it up once it was on blu-ray. I don’t know much about the film but I do know this: I would have certainly had a far less fulfilling experience if I hadn’t re-watched Sleeping Beauty first.

So, if you’re like me and you’re looking forward to Maleficent but haven’t seen Sleeping Beauty in like two decades I highly recommend you pick it up!

Interested in what you’ll get with the Diamond Edition blu-ray release?

One of my favorite things on every blu-ray or DVD release are the deleted scenes. I love cinematic storytelling and I particularly love how fluid it can be even once you get into the shooting stage. There are so many little bits and pieces that get scrubbed from films. Classics like Sleeping Beauty are no different. Roughly animated from storyboards, the scenes include The Curse is Lifted and the Arrival of Maleficent which are two deleted/alternate scenes. They are both fun to watch but the really interesting scene is the The Fair which is a remnant of a much different movie. There was a time where, instead of sending Aurora away, her father kept her locked away in the castle to keep her safe. In the Fair, the young princess leaves the castle unattended and a little blue bird friend of hers, Cyrus, takes a much more central role. It’s really cool to sort of see what could have been. I love that sort of thing.

The Art of Evil: Generations of Disney Villains

Maleficent will always be one of Disney’s most iconic villains but it’s hard to say that there are any Disney villains who are not memorable in their own way. This is intentional on the part of Disney. They want the villains to stick out and come out not just as human but in some eccentric manner. They area always meant to be one of the most interesting looking and acting characters in the film because it’s the villains that pull the film together. You need to remember them. This short featurette talks about that ideology and the process that animators go through in designing some of our most memorable Disney villains – including Maleficent, Cruella DeVille, and more. They even throw in some scenes of Hans from Frozen for good measure.

The latest in the @DisneyAnimation series of featurettes popping up on recent blu-ray releases, this featurette focuses not on traditional animators but on a visual development artist whose job is to give the story directors who help start visualizing the story. Some people paint or draw; the artist we follow works in papercraft. It’s almost like she’s making stop motion characters at times because she doesn’t just work in 2D to visualize the story but also in 3D with her paper character designs. It’s really, really cool to see. And it’s a medium I admittedly never really considered for this sort of thing. You should watch it just to see the final product that she creates during the feature. It’s so cool.

Included on this release – as with others – are older bonus features that have been released on previous editions of Sleeping Beauty releases. Included are the Sound of Beauty: Restoring a Classic, Picture Perfect: The Making of Sleeping Beauty, and Eyvind Earle: A Man and His Art. They are really neat featurettes especially for those people who really get into the making of films – especially animated films. But, if you have an older edition of Sleeping Beauty, you’ll probably have these. You’ll probably have the Audio Commentary, too. Not included, however, is the music video from Emily Osment of “Once Upon A Dream” that was included on the original blu-ray release a few years ago (unlike the Jungle Book: Diamond Edition which included an extremely dated Jonas Brothers music video) but that’s not really a loss.

There are a few other new features on the blu-ray release that might be of interest. Once Upon A Parade features actress Sarah Hyland leading a group of reluctant kids through Disney and turning the daily parade into a fairy tale it’s self by spinning her own story. It’s kind of corny but kids will like it. And if nothing else you get to see the new Maleficent steampunk dragon at the end! Beauty-Oke: Once Upon A Dream is not nearly as fun as the Jungle Book version of the sing-along format but “Once Upon A Dream” is really the only song in the movie so it’s fun for what it is.

Final Thoughts:
If you don’t already have Sleeping Beauty in your collection now is the perfect time to add it. If you have the blu-ray release from six years ago this version doesn’t really add much so there’s not really much of a reason to upgrade unless you want to or you’re just really committed to seeing all of the @DisneyAnimation featurettes. But if you haven’t seen Sleeping Beauty in a really long time and are looking forward to Maleficent’s release next month you really should check out the original film before hand. The Diamond edition blu-ray and DVD set comes outs on October 7th and is available in stores everywhere today. So, you know. It’s definitely worth picking up if you don’t have it or haven’t seen it in a long time! My only gripe? Considering how much time Aurora spends in her dress when it’s blue I’m not sure why it’s pink on the front cover. But I digress. It’s a great film and great release. Grab it today!

A review copy of Sleeping Beauty: Diamond Edition on blu-ray was provided for the purpose of this review by Allied Integrated Media and Disney. Nerdophiles was not compensated for the review and the opinions here are ours and ours alone.

One response to “Sleeping Beauty is Out of the Vault and Out on DVD and Blu-Ray Diamond Edition Today!”