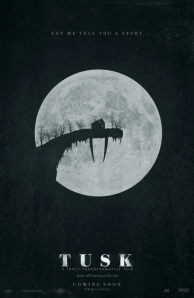 The movie based on a podcast based on a hoax listing has finally hit theaters. Maybe finally was a bit overselling it. From concept to release it took a little over a year for Kevin Smith’s newest release Tusk to hit theaters. If you’re looking for a spoiler-filled review, look elsewhere. I don’t want to ruin anything.

A little backstory might be necessary for this one. Smith has been doing a long running podcast with his producer partner Scott Mosier for the past seven years. Everyone knows what a podcast is at this point but on SModcast the two chat casually about their experiences in the industry, in life, and anything else that tickles their fancy. A little over a year ago, SModcast #259 dropped: The Walrus and the Carpenter, in which the two podcasters talked about a listing on Gumtree.co.uk for lodging. Rent free, a sizable space, but every day for two hours the lodger must wear a suit and behave as a walrus. This hour, hour and a half chat is the inception of what would become Tusk.

Tusk tells the tale of Wallace Bryton, a podcaster who heads to Canada to interview a YouTube celebrity for a story. Upon arriving he finds that the kid has committed suicide and he needs a new story. He finds a handbill for Howard Howe, a man offering his tales of adventure from a life well lived. He shows up to Howe’s home and what should happen? I’m sure you’ve guessed, at least partially. He gets drugged, and eventually turned into a walrus. That’s right. Justin Long gets sewn up in a walrus suit. Wallace’s girlfriend and friend (Genesis Rodriguez and Haley Joel Osment) meanwhile fly from LA to Manitoba in search for him and enlist the help of Guy Lapointe, a Quebecoise homicide detective. I don’t want to say anything more than that. 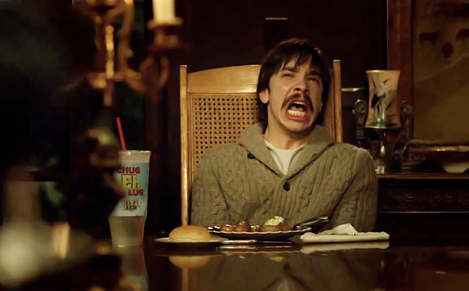 Long learns what is to be his fate. [EW.com]

Now, with that all outta the way, some thoughts. I enjoyed this movie. Honestly. Is it perfect? Absolutely not. Is it the bottom of the trash pile? By no means is it that terrible. Instead after all is said and done it is on the higher side of average. But, in my opinion, more important the movie’s rating is the process and that it exists at all.

If you can, go take a listen to that SModcast. There is something entirely magical about it. It is hysterical, and sure it is a stoner laughing overly hard about silly ideas but inside those wheezing smoker laughs is a kernel of the stuff dreams are made of. For the first time I can ever recall, I was there at the moment of inspiration for what became a ‘Hollywood’ movie. A movie was pitched and the audience of SModcast was in on the first rough outline of a script. If I am wrong about this please comment below, but as far as I can tell that was the first. Smith asked listeners to tweet back whether they wanted it with a #WalrusYes or a #WalrusNo. The response was overwhelmingly positive and Smith went to work. A man who had decided he was done with Hollywood found his Muse again.

A little over a year later and it’s done and out. So how did it do? Well there’s some side plot involving Justin Long’s girlfriend and friend that doesn’t really go anywhere. There are overly long shots that some may find outstay their welcome. But there’s also a creepy/ludicrous walrus suit that Justin Long gets put into. There’s great acting throughout. There are jokes that work amazingly well, nods to all of the podcasts Smith does, winking at the fan-base who made the movie possible. 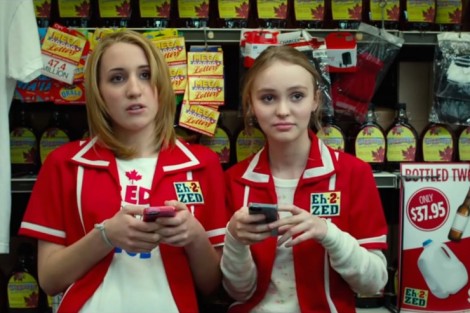 There are odd plot choices that don’t really work or could have been freshened up. The jokes are weak or dated at times. The movie frequently utilizes flashbacks that, had the original scene been worked out, wouldn’t be necessary, cutting down on the run time. The effects are unsettling and, given enough time, ridiculously funny. Yet, all these points that might be a problem in any other movie are, for me, forgiven when taken in with the movie and context as a whole.

Smith has been running around the podcast circuit doing interviews and any one of those complaints in the last paragraph he has acknowledged. It makes it hard to be too down on the guy when he recognizes that yeah, it is kind of a stupid movie isn’t it?

In discussing it for the movie review podcast I do (found at Empire or Jedi natch’) we landed on this: This movie would have been entirely great had it been released through the web, same as it was founded, for the fans to enjoy as is, but it getting the full theatrical treatment feels like it should’ve been subject to a bit more quality control.

The movie ends a bit strangely and mid credits there’s a clip from SModcast #259 pitching that exact ending. It legitimizes the whole movie. As if to say between breathless laughs, “Yes, we’re in on the joke, have been from the beginning. Thanks for watching.”

It’s hard not to recommend a movie that so obviously is a creation of love and, as Kevin Smith is often saying, ‘whimsy’. If you can, go check it out in theaters. It’s worth it to see these things on a bigger screen than what you got at home.

3 responses to “TUSK: A History and Review”