Summary: It’s been a long summer for the remnants of S.H.I.E.L.D. as they try to pick up the pieces of the organization while hiding in the shadows. Now the original 0-8-4 is in danger of being picked up by HYDRA and S.H.I.E.L.D. is fighting against both them and General Talbot.

Welcome back from space, MCU lovers. I know we had a fun summer out exploring the galaxy with Burt Macklin: Space Cop, but I think it’s been less fun for what’s left of S.H.I.E.L.D.

The season two opener ‘Shadows’ starts up with a flashback to 1945 at the end of World War II. The last HYDRA base in Austria is trying to get the hell out of dodge with the last of their relics, including some strange obelisk that the Red Skull claimed to “may hold the answer to death itself.” However, their escape is interrupted by the Howling Commandoes themselves, now lead up by Peggy Carter (Hayley Atwell). I cannot tell you how happy I was to see Peggy, Dum Dum and Morita bust up this escape attempt. Is it Agent Carter time yet?

The Commandoes arrest Dr. Reinhart (Reed Diamond) and gather up the assets being held by HYDRA to be looked over by Howard Stark. Peggy doesn’t seem so confident in Stark’s ability in observation though and emphasizes the need to keep these things protected in peacetime. She takes a picture of the container holding the obelisk, which is labeled “S.S.R. Item # 084.” Yeah, I think you can start to put things together.

Flashforward to current times, with Skye, May, and Trip serving as backup to Agent Isabelle Hartley (Lucy Lawless) and her mercenary team of Lance Hunter (Nick Blood) and someone named Idaho. Hartley is trying to get information off of a former SHIELD agent regarding the original 0-8-4, but things go south rather quickly when a mysterious man who appears to be bulletproof kills the agent and his guards and escapes with the file. Coulson orders them to go dark so they won’t be caught. 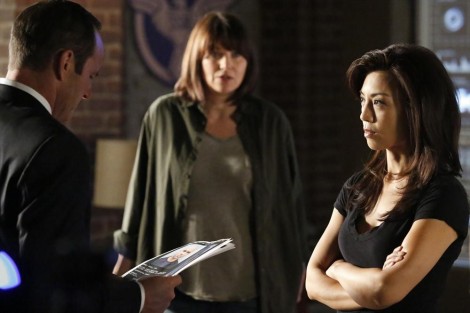 May is back as Coulson’s right hand. [ABC]

The team heads back to the Playground, where Coulson requests an audience with May to get an update on the case since he’s been busy flying around the world trying to recruit who’s left of S.H.I.E.L.D. I’m going to pretend this involved a visit to Clint and the MCU version of Pizza Dog, but that’s unlikely. However, he calls off his next flight when he realizes the severity of the information lost.

It’s in this part of the episode that we get an idea of how the team has been since we last saw them. Skye is leveling up and has even got the stance of an agent now. Coulson has assigned her to investigate the mysterious markings that both him and Garrett were drawing at the end of last season. She’s getting nowhere, of course, but she’s also appearing to be the outlier in this strange side effect of GH-325.

More good news from the end of season 1 is that Fitz is alive and up and moving! The bad news is that there was a lot of damage to his frontal lobe. He’s struggling with words and his work, taking longer than usual to get the cloaking done for the team. Simmons is trying her best to help him though, so there’s that. He is able to determine the origin of the metal shards that came off the bulletproof man since they turn to flesh right in front of him. It belongs to a man named Carl Creel, who has the ability to turn his skin into any material he touches. With some investigation, the team finds out that he was crossed off the S.H.I.E.L.D. index a while ago. I’ll let you guess which agent that got blowed up with an 0-8-4 last season was the one to do it.

Since Creel is revealed now to have ties between Garrett and HYDRA, the team has no choice but to talk to Grant Ward, who is now imprisoned in the Playground. Since he’ll only talk to Skye though, it leaves her in a vulnerable position, but Billy Koenig (who apparently has so many brothers it freaks out Trip) assures her that the tech will protect her.

Director Coulson at the helm. [ABC]

I have to admit, this actually ended up being my favorite scene of the episode. Even in a place of distrust, Chloe Bennett and Brett Dalton play off of each other beautifully. Skye shows a lot of growth in character being able to be firm and stone faced in the face of someone she used to love and who she is now afraid of. Ward, on the other hand, comes across so unsettling in this scene. He’s obsessed with Skye, but she gives him nothing. Of course, I worry that the use of Ward’s suicidal tendencies will be treated more as a case for sympathy in the fandom and on the show. Alice Morgan tried to commit suicide while imprisoned on Luther too. It still made her a sociopath.

He also hints that he knows about Skye’s father, but at that point, she has already completely cut him off. Still, I have a feeling Ward will be at least somewhat significant to that plot.

Ward gives the team the information needed about Creel as well as how HYDRA is communicating with each other, which turns out to be accurate much to Skye’s chagrin. This leads the team to execute a plan to find General Talbot (Adrian Pasdar) and warn him about Creel. Of course, Talbot being the stereotypical gruff general who doesn’t listen to reason, he’s easily attacked by Creel. Lucky for him, Skye and May come to rescue his ass before they kidnap him and take him to Coulson. Okay, not the most ideal way to go about things. Creel is captured by Talbot’s team, which is the worst thing they could have done really.

Coulson goes to talk to Talbot, trying to convince him that what’s left of S.H.I.E.L.D. is really the good guys, that HYDRA is still out there, and that he’s put Creel right where he wants to be since he’s after the 0-8-4. Talbot doesn’t listen though and tells Coulson that on no uncertain terms that they will ever work together. Coulson shoots him with the ICER and the team leaves him outside the Pentagon in just his underclothes.

During this… interview? Interrogation? Plea? Whatever it was, Koenig was getting fingerprints and voice samples off of Talbot. In the distance, Fitz laments that Koenig is becoming the new golden boy while he’s getting pushed to the side due to his condition. He hates that he’s being treated like he’s going to break, but Simmons assures him that he’s getting better. Is it me, or does Simmons seem a little off to everyone?

Using what they managed to get off of Talbot, the team sneaks into the facility where Creel and a bunch of S.H.I.E.L.D assets are being held. Can I just say that the best part of this is Trip in Talbot’s uniform? I was swooning something fierce over here.

Of course, the team doesn’t know that by the time they get there, Creel has already escaped from his cell and is shadowing the team. Hartley manages to find the 0-8-4, but in a moment of one-off character dumbness, touches it. It immediately turns her hand black and stone like and she can’t let go of it at all. Skye notices the obelisk begins to show the diagrams Coulson showed her, but before she can investigate further, Hunter and Idaho say “Bump this” and escape with Hartley. With the team under attack, Hartley and her team gone, and Creel escaped as well, it seems like it would be a good time to go dark. However, Coulson tells them to continue with the mission. The team may have not escaped with the 0-8-4, but they do the consolation prize of a quinjet with cloaking technology!

“But wait,” I’m sure you’re saying like me at home, “Isn’t Fitz working on cloaking? Why not let him finish?”

Well, here’s the few paragraphs later: It turns out that the frontal lobe damage Fitz suffered was so extensive that his work isn’t the same anymore and they weren’t going to get it at the pace he was moving. His condition hasn’t improved in the last few months, especially since Simmons left.

Yep. The reason Simmons felt so off in this episode was that she was just in Fitz’s head. It’s okay to curl up in a ball with your feelings now. I did too. Simmons’ actual location is currently unknown, but apparently her thought of leaving Fitz to heal was the worst thing she could have done. Oof.

Hartley’s team tries to get her to a hospital, but Hartley is aware that she’s going to die if whatever effect of the obelisk continues to spread. She asks Hunter to cut off her arm, which he obliges to after a decent amount of hesitation. He’s eventually successful, but it’s right then that Creel appears in the middle of the road. He turns himself to asphalt and Idaho crashes into him. The car flips, killing Hartley and Idaho and throwing the obelisk from the car. Hunter plays dead and appears to be evaluating the life choices that got him right to this moment as Creel turns his hand to rubber and walks off with the obelisk. FRAK ALL, YOU GUYS.

In the stinger, the HYDRA agent who was working with Creel informs a man named Dr. Whitehall that the obelisk has been found. Whitehall turns, revealing himself to be an unaged Reinhart from the beginning of the episode. OH NO. OH NOOOO.

Even with the tropes-y moments and the biggest waste of Lucy Lawless since the Burn Notice episode ‘False Flag,’ ‘Shadows’ was a fun and suspenseful moment that was a definite payoff for the summer wait as well as the audience’s emotional investments in the characters. While I’m not fond of Hunter or Ward, I am interested to see what their contributions are going to be like to this season. Not to mention that I’m curious to see how the mystery of the symbols, Skye’s father, and the big bad of HYDRA all play together because it seems like it will go that way.

Not to mention we’ll be rolling right into Age of Ultron by the end of the season, so there’s that too. Still, it’s a long way to May, so let’s settle in. It’s going to be a wild ride.