Don’t forget to enter to one of the amazing prizes being raffled away as part of the Perilous Sea book tour! Win copies of Sherry Thomas’s Elemental Trilogy books, sweet swag, and more! Get more information below or  ENTER HERE! 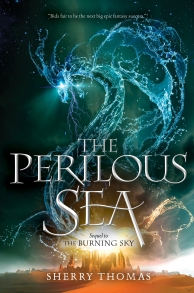 It’s no secret that I absolutely loved Sherry Thomas’s the Burning Sky – the first book in the Elementary Trilogy and the direct predecessor to The Perilous Sea. If I had to pick a ‘Best New YA Book of 2013’ it would be that one. It was amazing. It was magic, adventure, danger, and romance in the sort of perfect mixture that so many YA books before it had failed to capture. Plus any YA book that Therese likes will have me singing it’s high praises because it’s hard to find one she likes.

Basically, Sherry Thomas is a genius and The Perilous Sea was probably my most anticipated sequel of 2014.

And if you’ve read The Burning Sky you’d understand why!

Sherry Thomas left us in a place with so much potential going forward. A lot changed at the end of The Burning Sky and we had to wonder what was ahead of Titus and Iolanthe. I think that the synopsis for The Perilous Sea sums up what we’re coming back to pretty well.

After spending the summer away from each other, Titus and Iolanthe (still disguised as Archer Fairfax) are eager to return to Eton College to resume their training to fight the Bane. Although no longer bound to Titus by a blood oath, Iolanthe is more committed than ever to fulfilling her destiny—especially with the agents of Atlantis quickly closing in.

Soon after arriving at school, though, Titus makes a shocking discovery, one that makes him question everything he previously believed about their mission. Faced with this devastating realization, Iolanthe is forced to come to terms with her new role, while Titus must choose between following his mother’s prophecies—and forging a divergent path to an unknowable future.

How can you read that and not immediately think: LKJASDLKFJAWEOA!?

And The Perilous Sea does not disappoint. Let me just throw that out there now in case you were worried that it wouldn’t live up to the first book in the series. It does.

Though it also changes things up a bit.

The Perilous Sea doesn’t just shift between Titus and Iolanthe’s perspectives but also between time periods adding a new dynamic to the story telling. Without giving too much away, the story starts some seven weeks before the other half of the story is taking place. You’ve got to sort of keep track of how the time and story is shifting as you go along. One chapter will take place in the present and it’s dangerous, precarious position our heroes find themselves in. It’s a faster paced portion of the story while the past portions see Titus and Iolanthe back at Eton with their friends dealing with fare more intrigue and deception than life or death situations.

I like that constant change. It keeps the action coming constantly while the rest of the story is building up. You never really want to stop reading because you need to know what’s going to happen next in each part of the story.

And, man. Do the ‘present’ portions of the book at times get your heart pumping.

My favorite part of this book, though, wasn’t the way it was written but in what we got out of the story. Things start changing for Iolanthe and Titus in a big way early on and it challenges pretty much everything they know and everything they’ve done up to this point. And in doing so we actually get to branch out and learn more about the world we’re in and the characters, too. Kashkari and Wintervale in particular – two boys who had smaller roles in the first book – come into much more prominent roles. It’s nice because this such a rich story and Sherry Thomas has created such interesting characters. I just knew there had to be more to them. And I was glad to see that I was right!

I honestly can’t praise this series enough. It some how manages to avoid so many of the YA pitfalls that make every dystopian book or attempt at fantasy fall flat. Sherry Thomas has a gift and I am so glad she’s brought it to the realm of YA fantasy.

If you haven’t read the first  book you need to do it now. And you’re so lucky because at least you can take your time and know that there is a second book waiting for you when you’re ready. Now I have to wait another year for the third one and, honestly, it’s going to pretty much be absolute torture.

If you need your own copies, perhaps you should enter the giveaway below and try your luck!

Rockstar Book Tours has an amazing giveaway to go along with this book tour. Like, seriously. It’s awesome. Unfortunately it is only available to US readers – sorry everyone!

ENTER HERE FOR YOUR CHANCE TO WIN. CLICK THIS. DO IT. YOU KNOW YOU WANT TO WIN!

Sherry Thomas is one of the most acclaimed romance authors working today. Her books regularly receive starred reviews from trade publications and are frequently found on best-of-the-year lists. She is also a two-time winner of Romance Writers of America’s prestigious RITA® Award.

English is Sherry’s second language—she has come a long way from the days when she made her laborious way through Rosemary Roger’s Sweet Savage Love with an English-Chinese dictionary. She enjoys digging down to the emotional core of stories. And when she is not writing, she thinks about the zen and zaniness of her profession, plays computer games with her sons, and reads as many fabulous books as she can find. You can connect with Sherry through her Website, her Blog, Twitter, Facebook, and Goodreads.

Author photo by the lovely and talented Jennifer Sparks Harriman at Sparks Studio.