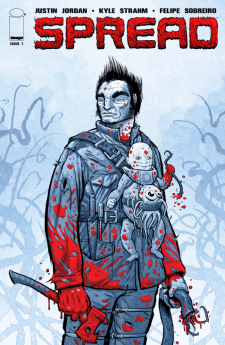 Is it just me or does Spread kind of seem like a cross between the Walking Dead and Saga?

That’s definitely not a bad thing. Those are two awesome comics. But that’s just the sort of vibe I’ve gotten so far from this first issue. I don’t think I can be the only one. I mean, we’ve got this story being told by a girl who  is an infant in the beginning. So, that’s kind of like Hazel in Saga, yeah? I mean, heck, the baby girl in Spread is actually named Hope which is one of the names Alana had vetoed when they were trying to name Hazel.

Then, we’ve got this harsh, post-apocalyptic landscape where people are just as big of an enemy as the world around you. But instead of zombies we’ve got some kind of made, killer biological monstrosity creeping around that can, well, make zombies. Among other things. So, I guess there are zombies. They just aren’t traditional zombies and ‘the spread’ as it called can do far worse things.

What the Spread really is probably can be put up to some debate right now since we don’t really know much about the rules behind this particular evil. It’s described as a ‘biomass’ – a living, arguably sentient parasitic organism that seems to consume whatever it comes across. Justin Jordan – one half of the creative team – sort of described it all as “a world where John Carpenter’s The Thing ate North America.” Unleashed by humans in our ever increasingly invasive search for ways to exploit the planet by digging deep into places where we don’t belong, the Spread nearly wiped out humanity. 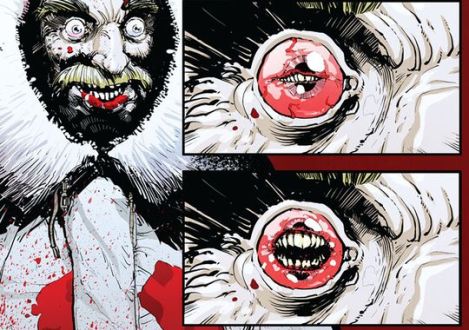 Okay, so, the mouths in the eyes are just creepy.

The main character of the book – named Sean but called “No” because that just about all he says and he’s not much of a talker – is a survivor stranded in the wastes of the ‘quarantine zone.’ He’s got the good fortune of being immune to the Spread which means it can’t take over his body. That doesn’t, of course, mean that it can’t kill him. Or that he’s immune from the dangers posed by other survivors who will just as readily kill you as anything else. It just means that he can live

No is a good character. He’s likable in a sort of Wolverine-esque way. You can respect a guy whose quiet and reserved and knows what’s really going on. (Plus you gotta love a man who can handle his hatchets.) Of course, I’m not quite sure how well he’s going to handle raising a baby in the long run. But still. I guess he’ll have to cope. Because the thing about this baby girl he comes across, Hope, is that unlike No and others like him she’s not just immune to the Spread but she might be humanity’s best chance at fighting back against it.

We don’t know a whole lot yet about what’s really going on in Spread and this first issue was your pretty standard introduction. Unlike the Walking Dead which could continue on indefinitely, Spread presumably has an end. I mean, Hope is telling this story so presumably she’s still alive and things have been sorted out in the world. But, as this is an on-going series, we’ve got a lot of time to kill, a lot of characterization to get through, and a lot of world building to do and I honestly couldn’t be any more thrilled to get to it. Spread has given us this crazy, deadly, and exciting world – and I for one am looking forward to exploring it further.

The Spread and the various forms it takes is kind of gorgeously put together in a gross sort of way.

Part of that is probably because of how great the book looks. I’m a little iffy on the character designs sometimes, I’ll admit. No almost seems too Wolverine-y and Hope’s eyes on the front cover freak the crap out of me. But the world around them is stunning. It’s natural and macabre at the same time. I love it. The colorization really adds a lot too the book. The contrast between the red of the Spread and blood against the white and blues of the rest of the book is phenomenal. I love it.

Honestly, if the story hadn’t been that great the artwork probably would have kept me going with this series – at least for a while.

Luckily, the story was good. And, more importantly, it has a lot of potential to build on the foundation it set for itself in this issue. The creative team behind Spread seems to know what they are doing and I am really excited to see where they take things from here.

Final Thoughts:
For whatever reason I’m really digging horror comics lately and Spread is exactly the sort of comic I’ve been looking for. It’s basically everything I could ever want: pseudo-zombies; silent, burly men; and a heart-string tugging sorta family aspect. As long as they keep delivering, I’m in.