It’s weird to think that there was ever a time in Atlanta that MomoCon didn’t exist. In ten short  years, the con has grown to a little free convention put on by Georgia Tech’s anime club to a full blown animation and gaming con that attracts people from around country.

How have the changes affected it though?

Insert your own jokes about it relocating to the Capitol here.

My first MomoCon was in 2008, when the convention was still in Georgia Tech’s student center. The con had only existed for three years at that point, but it was rather obvious that it was growing into something a lot bigger. I may just be saying that though because I was stuck in the bottom floor of the student center with the rest of the con when a tornado watch occurred on Saturday.

This year was MomoCon’s third year in a hotel and I have to say, they’ve grown into it rather well. They placed the dealer hall and artist alley into the Marriott Marquis to help alleviate traffic in the Hilton. Which worked out pretty well, I would say. I know it certainly helped me from spending money I barely had much like the decision to move the dealer hall for Dragon Con. I feel like they could have added more programming in there as well though since it sometimes felt the hallways on the second floor of the Hilton would become crowded as people waited in line for panels in the smaller rooms.

With any anime con I go to, I often worry that I won’t find much to do since I’m not as much into anime as I used to be. Seriously, the last series I watched all the way through was Puella Magi Madoka Magica last year and that had been the first in about five or six years. Lucky for me, MomoCon had plenty to offer that wasn’t strictly anime related.

The first panel I went to was the Flow Arts panel on Friday afternoon. This could have possibly been a bad move on my art since it was at the same time as opening ceremonies, but I was there to support my friends and geek out on one of my favorite physical activities. The panel was very relaxed as everyone talked about their various props, why they do flow arts, and encouraging people to try it out and not give up if they’re not understanding something. The rest of the panel became playtime as everyone spread out and used the props on hand. It was pretty awesome, but made me hate that I didn’t bring my practice staff with me.

After spending some time with some very awesome Avatar: The Last Airbender cosplayers at their photoshoot, I ended up going to the Disney Karaoke Contest. If you want some serious fun at a con, this was the place to be. Many of the contestants were dressed up as the characters they were singing and just proved how amazingly talented the attendees of this con are. The two performances I’m not sure to forget anytime soon were the amazing Anna cosplayer who sang ‘Do You Wanna Build A Snowman?’ in all three voices of the song and the woman who performed a beautiful rendition of ‘When She Loved Me’ from Toy Story 2 completely acapella. Between the amazing contestants and the crowd enthusiastically singing along with them, I really hope this contest grows more in the future.

The next day, I was able to spend more time at the con, taking pictures of amazing cosplayers and having a mostly Animaniacs themed day. Seriously, even if the rest of my con was atrocious, at least I got to hear Rob Paulsen and Tress MacNeille curse while voicing the characters of my childhood while reading the script for The Matrix (which really does sound like a porn out of context) and hear the cast that was there sing the theme song live. There was something so unreal and beautiful about that experience of hearing these people who were my childhood speak, talk about their experiences, and seeing the lasting effect they’ve had on the people in the room. If MomoCon ever gets them back, it will be welcomed, but I’m so happy they were able to give the attendees it this year too.

I think the actors were just as thrilled as we were to be there.

Plus, hearing Maurice LaMarche belch to ‘Blue Danube’ in person was nothing short of transcendent.

Another great panel that I got to attend on Saturday was the Women in Voice Acting panel. Can I just formally request that this panel happens at any convention with an anime, animation, or video game theme for the rest of all time? Because this was important. Not only was it extremely talented women talking about the work they’ve done, but their experiences in an industry where there are more women in the field but less roles for them. I mostly went for Ashley Johnson, but I was seriously impressed by everyone there. Especially Courtnee Draper, who had recently finished law school and admits that she does most of her own negotiation. They also managed to make the entire audience hungry talking about good food they’ve had in the past.

As is customary with MomoCon, a lot of the crew at Floyd County Productions was there to talk about the work they’ve done in the past year. I swear, these panels are the hidden gems of MomoCon because everyone they put on these panels are funny as hell. What made it even better was the fact that Lucky Yates was running lights and sound because no one else in the room was and he refused to answer questions that weren’t related to lights and sound. Bless him and bless Floyd County productions.

Not to mention that some of them dress like fruit.

With Saturday night winding down, I ended up running into that problem I usually run into with MomoCon: there’s nothing to do after a certain point of the night. Sure, you have the rave, but I haven’t been into anime con raves since I was 17. If it was still at Georgia Tech campus, I would understand this better, but this is there third year as a paid con in a hotel. A hotel that was completely booked, by the way. Why no late night, adult only panels? Why no alternatives to karaoke or the rave? Why no bands? I might be a little biased on that last one since I’ve worked for the first band that ever played MomoCon for four years, but the lack of live music at the con certainly left a huge hole for me.

At least I had friends to talk to and get into shenanigans with, otherwise my con would have ended on a low note. 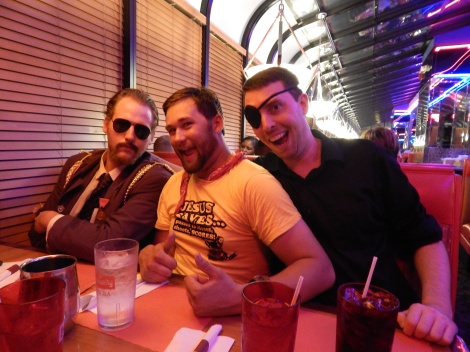 As MomoCon caps off it’s first decade as a con, it’s certainly amazing to see how far they’ve grown. This year was probably the most fun I’ve had at a MomoCon since my first one, between the guests they’ve brought in and the panels they hosted. I actually regret that I didn’t get to spend more time in the game room since they had scheduled board games going as well as an extensive collection of old school arcade games to play along with newer video games at various stations.

However, I do worry that they could be trying to grow too fast since they’re going to be moving into the Georgia World Congress Center next year when they barely used the second hotel this year. I think as long as they add more programming for late night and use the space in a good way that doesn’t feel too spread out, they will be right as rain as they go into their second decade as a con.

For more photos from MomoCon, check out our Facebook album. For more information about MomoCon (including the first guests for next year’s convention), please visit them at MomoCon.com.