X-Men: Days of Future Past

This is it, folks. Today is the day X-Men: Days of Future Past comes out! By now most of the hardcore fans have probably seen it but for those of you who’ve held out for a more reasonable hour let’s talk about what’s on your mind which, I assume, is whether or not you should see this movie. I’m going to come out right now and say unequivocally that the answer to this question is yes.

But I understand the hesitation.

I mean, I guess I understand it. But how anyone could hesitate to see these beautiful faces on the big screen I’ll never understand. [Cinema Blend]

While X-Men: First Class was pretty spectacular, X-Men: The Last Stand was a major disappointment and is generally panned across the board. This is always extra disappointing when you take into account that X-Men and X-Men 2 are probably the best of the early 2000s superhero offerings. Nothing about The Last Stand really seems to sit well with long time fans and while First Class and the Wolverine movies (of which I’ve only seen Wolverine: Origins) take place in the same cinematic universe we never really talk about the ending of The Last Stand. X-Men: Days of Future Past, however, picks up a couple decades after the end of The Last Stand so it’s kind of hard to live in denial that any of it ever happened.

I promise you, though, that if you see Days of Future Past you will not be disappointed. Seeing those old, familiar faces (and a few new ones) in the dark, dystopian future ruled and ravaged by mutant-killing Sentinel robots that came after The Last Stand was reason enough to go. Professor X, Magneto, Kitty, Bobby, Storm, Wolverine? The actors from the first X-Men films are those character. It was a huge and very welcome blast of nostalgia to see them all together along with some new faces bringing to life Bishop, Colossus, Blink, Sunspot, and Warparth, who my comic nerd heart never thought I would ever see on the big screen.

Look at these gorgeous people. Look at them. It’s like a rainbow of mutants with Wolverine at the center.

These moments are, in the grander scheme of things, a fairly small part of the movie. Taking it’s queue loosely from the old school X-Men arc of the same name, Days of Future Past features Kitty Pryde sending Wolverine’s consciousness back in time to help stop the cataclysmic event that ultimately set the world on it’s path to the dystopian future the film opens on. Once there he has to find  a younger Charles, break a younger Magneto out of prison, and stop Raven – now fully embracing the identity of Mystique – from assassinating Bolivar Trask and bring upon them their absolute destruction.

It’s a pretty tall order. And it comes with a catch – if the Sentinels who are tracking down the X-Men we all knew and loved from the original films and kill them, then Wolverine’s mission ends then. He’s working on as much of a time table in the future as he is in the past.

Having Hugh Jackman’s Wolverine go back in time to mingle with the newer set of X-Men from the First Class era was in itself a great way to have the two casts come together. Magneto, Mystique, Charles, and Hank (Beast) took the center stage and sadly old favorites such as Havoc (who does appear) and Banshee and Angel (who do not except in photographs and the occasional name drop) kind of get left out in the grander scheme of things. But we get Peter Dinklage and Evan Peters’ Peter (not Pietro) Maximoff instead which – after you see Quicksilver in action – is probably more or less worth it. 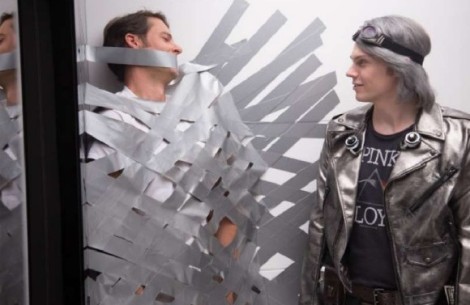 Believe it or not this oddly dressed kid is one of the best parts of this freaking movie. He is not in nearly enough of this movie.

The plot itself was pretty great. At times it almost felt like a movie and a half with the main story being told in the past but a shorter story being told in the future. I had so many damn uncontrollable emotions watching the old characters struggling to stay alive in the future and reconciling with their fate. And then back in the past there were plenty of moments of #feels and betrayal and heartbreak and just… ugh. I loved it so much.

Honestly, Magneto and Charles more or less steal the show as they often do. Their differing opinions on how to handle mutant rights issues comes to the forefront and it’s nice to see both of them challenged and to see how their characters changed, grew, and developed in the ten year gap between the films. Having Hank play a larger role was nice, too, because Nicholas Hoult really is a fantastic actor.

The end resolution was immensely satisfying but I’ll leave that until my spoiler-y section of this review. Basically I just want to see more of Michael Fassbender’s beautiful face before the casts start meeting up again because, let’s be honest, if I counted his face in my rating criteria this would be a six star movie.

Can’t you just feel the raw emotion and internal turmoil? (Okay, so, the only real reason I posted this is Michael Fassbender’s face.) [Cinema Blend]

Oh! And stay for the end of the credits! There’s one stinger and it’s totally geared towards the comic fans but it’ll also tie into the upcoming X-Men: Apocalypse film that’s coming out next!

I want to say so may other things but I’ll make a spoiler-ific post tomorrow after I see it again in theatres with Therese and some friends. Because I need to talk this through and /r/comicbooks can only do so much for me! I need you, Nerdophiles, to bask in the glory of this movie with me.

Final Thoughts:
So, basically, all I can say is see it. Just… go see it. It’s a fantastic movie. Probably one of the best X-Men movies yet (I still think X Men, X2, and First Class are as good or better) and with the cast First Class cast reprising their roles for Apocalypse it can only get better.

Honestly, this has been my favorite X-Men to date. X2 probably stands after it, followed by First Class. X-Men is my favorite Marvel comic book movie franchise. Despite the failures of The Last Stand and my slight boredom of the constant spotlight on Wolverine, mutants trump all in my book. The themes of peaceful coexistence and acceptance ring truer to me than the classic battle between good and evil. The story of not only survival, but of living in a better world are brilliant and Bryan Singer does a great job of putting us in a mutant’s shoes. That being said, First Class really revitalized my hope in the series. It brought fresh faces and a modern way of filming to the audiences, not to mention Michael Fassbender into the universe. But still, First Class is an origin story, and origin stories rely on their source.

Days of Future Past is an independent story. It’s not really an origin story, it’s redefining the entire universe of X-Men. Seeing the new cast with the old brought back all of my feelings, and I felt myself more and more enraptured by a storyline that brought me close to tears every time. Of course, Evan Peters’ Quicksilver alone would make me want to watch this movie again, but it’s also the fantastic work by Fassbender, McAvoy, McKellan, and Stewart that leave a lasting impression. Peter Dinklage’s Bolivar Trask leaves little to be desired, but that’s through no fault of Dinklage, who plays his ass off in the role, rather just a lack of time for explanations. From the assassination attempts to the future storyline, there was not enough time to explain Trask’s hate, so we get a rather one-sided view of his fascination with the destruction of the mutants. All-in-all though, it’s a gorgeous movie, with beautiful and heart-wrenching scenes. Definitely go see this.

2 responses to ““X-Men: Days of Future Past” Blows the Rest of the X-Men Films Out of the Water”