Synopsis: GRACE IS IN TROUBLE EVERYONE PANIC

This week’s episode of Person of Interest picks up in the aftermath of the last new episode. Finch disappeared and left Reese and Shaw to their own devices. Greer (aka evil British DECIMA villain man) has been scheming with the American government and finally was given the green light to turn Samaritan on in New York City. So in other words, everything has gone to hell in a hand basket and the ride is literally just starting as we careen at full speed toward the season finale in another few weeks.

The episode opens with Shaw finishing up a number. She manages to save the life of a convenience store clerk from his dastardly employee who was trying to kill him for some unknown reason. After the situation is diffused, she meets up with Reese outside of the store where he gives her a line about kneecapping and she shrugs him off as a critic. They seem perfectly comfortable being out in the open even with the knowledge that Finch is gone and Samaritan is probably active, until Root appears and saves the day once more by dragging them into an alley and explaining that DECIMA had set up an ambush.

Come on losers, we’re going to go save the world

Now, I’m just curious about DECIMA. In reality we really don’t know a lot about this secret organization originally based out of China. I’d imagine they’re not a Chinese spy group trying to get a shoe-in to American intelligence in order to use it against the US. It has been suggested in the series that they really want to get into American spy feeds because they want to turn around and sell the information to the highest bidder. My problem with this is the fact we have yet to see any definitive proof of that. Greer wants Finch because Finch created the Machine and that seems to be his sole agenda lately. He wanted to get Samaritan up and running not to necessarily establish it as a possible replacement for the Machine (even though that is a side benefit) but because he wants to find Harold.

He’s fixated on Harold and is using a super computer that borders on artificial intelligence in order to find him and this whole arch makes me extremely suspicious.

So with this in mind, Greer is trying to track down Finch and will do whatever it takes to find him, even if it means going after the people Finch is closest to. So of course Root, Shaw, and Reese are all targets. Though thanks to Root and the Machine, Shaw and Reese have a chance at being safely hidden away, even if they suck at it. As they’re avoiding a traffic camera, a payphone rings and Reese goes back because he refuses to let a number go. He continues to uphold their original operation and when Root tries to chase him away from it he tells her the Machine can either give him a number, or it can give them a name. 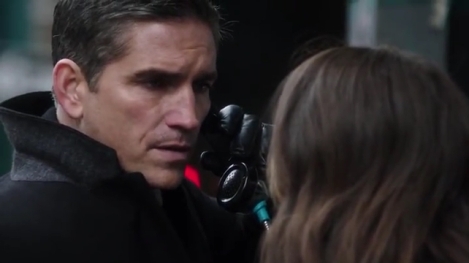 So of course the Machine in all her wisdom gives them a name through Root and no one is happy to hear it: Grace Hendricks.

That’s right, the number of the week is none other than Harold Finch’s former fiancé who believes he died in a ferry bombing. DECIMA wants her because of her connections to Finch and it is Reese, Shaw, and Root’s job to rescue her from that fate…all without Finch’s assistance because he’s gone dark and no one can find him.

The team manages to get Grace out of danger when DECIMA attempts to abduct her and Reese once again assumes his identity as the late Detective Stills in order to get her to go with them. They stash her away at the police station under Fusco’s watchful eye and I must say it is nice finally getting to see Carrie Preston and Kevin Chapman interact. In the midst of all the drama there was a bit of light heartedness to their scene. I have to admit, it was also nice to see Fusco again since he was pretty much absent from the last new episode of Person of Interest. I’ve gotta have my Chappy, guys. It isn’t a real episode of POI unless I get my dose of the Fusco.

Loved working with @POIFUSCO too. He never met a stranger. So sweet and hilarious, too. Makes everyone crack up. #PersonOfInterest

Unfortunately, while in the interrogation room Grace notices a flier regarding the disappearance of the real Detective Stills and realizes something isn’t quite right. Unlike a lot of characters on television put in her situation, she didn’t just sit there and agonize over what it could possibly mean. Carrie Preston is a phenomenal actress and she brings such a great, confident, and dare I say it bad ass dynamic to Grace, that I believed the confused Grace Hendricks really would stand up and walk straight out of that interrogation room and refuse to take anyone’s crap. She has a healthy level of skepticism and didn’t wait around to be rescued. Instead, she played an active part in getting the hell out of a weird situation (even though it was actually the lesser of two evils) and I appreciate that in a character.

Thankfully Root, channeling the Machine, manages to talk her into trusting their rag tag group of questionable misfits. After they take care of a DECIMA agent who gets lured into an interrogation room where Reese is waiting to beat the crap out of him, Root blows up a building somewhere away from where they want to go and everyone piles in the car and tries to get the hell out of there.

These two have some of the best snark

Unfortunately as their driving there is a heartbreaking moment where Root gets information from the Machine and realizes that they are screwed. A car smashes into them (similar to what happened with Kara Stanton in a previous season) and DECIMA gets a hold of Grace. The team manages to avoid capture and now we’ve got a seriously divided scenario. Root, Shaw, and Reese are hiding out in New Jersey while Grace is in DECIMA’s hands and Finch is nowhere to be found. Until he finally shows up.

Michael Emerson shined in this episode. He’s a phenomenal actor but in this episode of Person of Interest he brought it to a new level. I have to say, him showing up on Grace’s doorstep was probably my favorite scene in the entire episode and in a close running for my favorite scene of the season. It was beautifully shot and acted insanely well. Reese and Shaw are informed that the camera overlooking Grace’s porch is disabled and they go to investigate. They find Finch there, sitting on the doorstep, the perfect noir-esque character in his hat with his eye hidden as he sits in the darkness. There is a certain mood he brings on the screen through the look he gives them alone and it is there that the audience understands the other side of Finch that lurks just below the surface of the usually quirky billionaire.

There have been a lot of discussions about Finch’s line at the end of this scene, where he tells Reese to not use violence unless DECIMA harms Grace. He says,

But, if they harm Grace, in any way, kill them all.

Now this would seem extremely out of character for a man like Harold Finch who works so hard to save lives. After all, he was unwilling to let Reese kill the congressman who put Samaritan into motion and put them all in this situation in the first place. Had he felt killing was okay before, he could have prevented DECIMA from releasing Samaritan and therefore wouldn’t have put Grace in danger. His change of heart seems strange until the viewer sits down and realizes the position he has been put in.

Harold Finch has lost everything. The Machine is still functional but there is one organization that wants to shut it down for good and another that wants to release a machine that rivals his own but in a more sinister way. He lost his business partner, lost his fiancé who is now put at risk because of his actions, and for a time he thought he was going to lose his team, too. After all, he disappeared and left Reese and Shaw hanging while he tried to figure out how to salvage the situation. He’s also made a decision, one I bet he made before he decided to tell Reese and Shaw about it, that he is going to give himself to DECIMA in exchange for Grace.

Finch is now a man who has lost everything and that is enough to make him change his mind about killing to protect the people he’s giving everything up to save. Especially Grace, who is an innocent in all of it.

So they arrange a meet and Finch trades his own life for Grace’s. Grace is sent off to Italy with a new life waiting for her there. Finch is in DECIMA’s hands and ends up whisked off to some secret lair where Greer had a lot of questions to ask. Reese, Shaw, and Root are the ones left behind to try and pick up the pieces and figure out how to save Finch.

Facing down the enemy

But Root has something up her sleeve: she intercepted a number of Samaritan’s servers.

Person of Interest was definitely frustrating this week. It was a high intensity episode with a lot of conflicts and very few resolutions. Grace is safe, for now. Harold is in the hands of the enemy. The Machine is still operating and assisting Root, and by extension Shaw and Reese. It will be interesting to see what next week has in store for a team that has been pulled apart and lost their leader.