Summary: Leslie and Ben find out they’re having triplets, causing Ben to overstress during preparations for the Unity Concert. Andy struggles to keep the secret of Leslie’s pregnancy from April. Donna asks Ron to run interference for her on her ex.

Since I already spoiled it in the summary, I’ll just go on about it here: BEN AND LESLIE ARE HAVING TRIPLETS. TRIPLETS!

Which should be more concerning than that is from a story perspective, but I have shipped these guys ultra hard since season 3 so the fact they managed to fulfill the weird prophecy Will Arnett’s one-off character had in season 2 by having three babies at once is kind of amazing.

Future parents to one third of the Supreme Court. [Facebook]

Of course, Ben being super accountant #1, he begins to crunch the numbers on how much it’s going to cost to raise three kids and begins to stress out for both him and Leslie. If you think either of them stressing out alone is bad, just imagine Ben doing it for the both of them. It even gets to the point where he nearly gets his hand taken off getting in a fight with someone paying $50 for a guitar signed by the Red Hot Chili Peppers.

That leads to two great things though: Zen Leslie trying to work an auction for the Unity Concert with a bunch of sticklers, and Leslie calling some random hospital nurse “Ann.” Because of course she does.

While this is all going on, Andy is stressing out over the fact he can’t tell anyone about the pregnancy. It doesn’t help that this is all colliding with his Johnny Karate gigs and April finds out he even has a secret. It also doesn’t help that Andy doesn’t take his shirt off further when hiding in it. C’mon man! Guardians of the Galaxy is three months away! Just give me a hint of what Chris Pratt is working with. 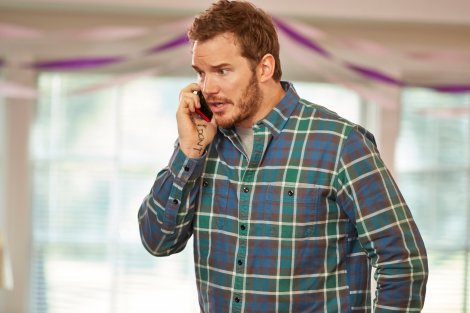 April tries to needle Andy’s secret out of him, but he tries his best to stay steadfast and not let the cat out of the bag. He lies and tells April that Larry is sick, which she believes and begins being nice to the poor guy over. However, she quickly finds that lie out and calls Andy out on it, which stresses him out more.

On a completely different plot, Ron decides to ask for Donna’s help at his step-daughters’ school with a play they’re putting on for the Unity Concert. Donna agrees, but needs Ron to run interference for her with her ex Joe, who’s a music teacher at the school. She warns Ron that he is her Tammy, which sets up a certain expectation of what this guy’s deal is.

Except the reality is completely the opposite. Joe (who’s played amazingly by Keegan Michael Key) is actually a total sweetheart. He’s good with his students, kind-hearted to their parents, and apparently makes the most amazing muffins in the world. Ron eventually points this out to Donna, and she says that’s the point. She doesn’t want to be with someone who actually wants to connect with her and doesn’t want to be a social butterfly like her.

Girl, if I had someone as cute as Keegan Michael Key making me muffins and being considerate as Hell, I would be putty! That won’t make you boring! 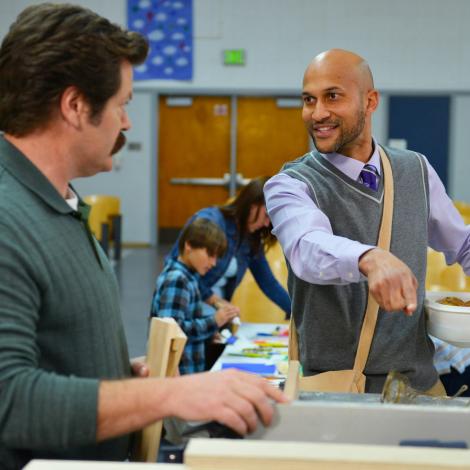 Ron points that out to her. Well, in different terms that “drama” and “happiness” aren’t the same thing. Donna dwells on it and she tells Joe that she’s willing to try it again as long as he doesn’t try to pin her down too fast. And he accepts her terms! A healthy relationship talk on comedy TV? Perish the thought!

The plots come together at the end of the episode when Leslie and Ben finally tell everyone about the triplets. Ben is still super stressed out, but you can see it begin to leave his body when everyone steps up and offers to help with the babies in their own way. April even thanks Andy for not telling her before then.

And Craig gets super dramatic about it because no one helped him sell off the stuff for the Unity Concert, but they all shrug it off because that’s actually really nice for him.

This episode was super heartwarming in that special Parks and Rec way. Seeing Leslie step up to keep Ben calm was wonderful as well as seeing how Ron has grown as a person since the beginning of the series. Am I ready for Donna to potentially settle down though? I’m not sure yet, but she could do WAAAAAY worse than Joe.

Really, I think it was that and lack of shirtless Chris Pratt that kept me from five starring this. It made up for it with Andy being his puppy dog self trying to keep the secret from April.

Will the season finale keep it up though? I certainly hope it does because I think it’s definitely going to make or break how I view this season overall.