The second trailer for X-Men: Days of Future Past hit Youtube earlier this week. As a long time fan of the X-Men, I am ecstatic to see what this new movie will bring. In this latest addition to the X-Men franchise, fans get the chance to see two star studded and fantastic casts come together in one movie. It is going to be a mutant extravaganza up in here, and it is going to be glorious. X-Men: Days of Future Past drags the audience back into the Marvel universe and leaves them in-between times. On one end we, the audience see the future and it isn’t pretty. In the face of a ‘mutant problem’ the world has responded with violence. Violence which leaves Professor X with little hope except to look back and try to change the future they are in. Therefore, on the other end we see the past.

So what is the solution?

Send some of the team back into the past to try and change the future! In order to do that, the team in the past (introduced through X-Men: First Class), must overcome their differences of opinion and unite in order to overcome the enemy. Add in Peter Dinklage (Game of Thrones) as the head of the anti-mutant movement and a host of mutant-detecting and slaying sentinels and we have ourselves a story that will captivate comic book fans and non-comic book fans alike. Will the X-Men and the Brotherhood of Mutants be able to get over past grievances and come together to save their own kind? Can changing the past really change the future, or will it cause the future to crumble even further?

Will Quicksilver be able to overcome his terrible costume?

Watch the trailer and decide for yourself, then go out and see X-Men: Days of Future Past on May 23rd, 2014. 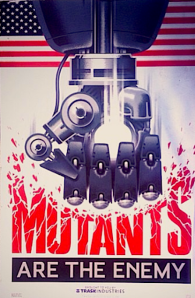 2 responses to “Two Worlds Collide in X-Men: Days of Future Past”