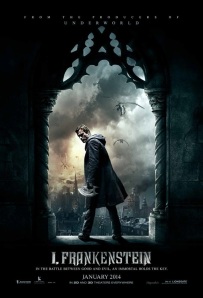 The trailer for this movie looked like it showed all the exciting bits in two minutes, and I was not wrong. So why go see this movie even though I gave it two stars? Well…it has Aaron Eckhart (Adam, Frankenstein’s Monster) and Bill Nighy (Prince Naberius). Honestly, I think Eckhart just did this movie for shiggles and it wasn’t much on Nighy’s part because he’s got the evil overlord thing down (the whole Underworld series, for example, or Davy Jones from Pirates). All the other actors and actresses are just there to look pretty and fight.

The demons are part of Lucifer’s gang put on earth, while the gargoyles are part of the Archangel Michael’s gang. These two factions have been duking it out since the creation of Earth. The demons in the graveyard attacks Frankenstein’s monster and he retaliates with a wooden crucifix. The demons explode into a swirling ball of CGI fire theatrics and “descend” back to Hell. The gargoyles are amazed that a “human” killed a demom. So the stone gargoyles (they are fugly…like the demons) swoops down and in a swish/whirl of their wings turn into humans clad in leather armor and capes.

The gargoyles take Frankenstein’s monster to their Queen, Leonore (played by Miranda Otto). She spares his life because she sees a potential for a soul in Frankenstein’s monster’s eyes. Then she gives him a name, Adam. The gargoyles want Adam to join their ranks and kill demons. They give him free range of the weapons room and he chooses two giant sticks with a pointy brass tip. Apparently any weapon etched with a double line cross can be used to kill demons.

Adam then leaves because “screw the gargoyles” he goes his own way and does whatever he wants (like the honey badger). Adam goes into the woods and in a quick montage shows him killing demons and “training” with his whistling sticks. Flash forward, Adam’s long curly and mangy locks turn into a hip-modern cut as the scenes change to the 21st century.

The underground lair full of dead bodies. Sort of looks like the Matrix.

The demons are still hunting Adam (for some reason…it’ll be explained later) and in Adam’s killing a demon a human died in the repercussion. The gargoyles get pissy and take Adam back to Leonore where her right-hand man, Gideon (played by Jai Courtney) says they should just kill Adam. Leonore says no and Adam is taken to a dungeon and strapped in until further notice.

On the other side of the coin there’s Prince Naberius and his jolly demon gang that are slumming it in a huge corporate building. In the building, there’s a lab where Naberius has his chief scientist, Terra (Yvonne Strahovski) and her assistant trying to reanimate a dead naked mole rat. They achieve in reanimating the rat with showy electrical current CGI. Naberius wants to move to human trials immediately but Terra doesn’t want to because she needs to do more research. Obviously, Naberius is not happy because he brings up the fact Dr. Frankenstein brought a human back from the dead 200 years ago. Terra says it’s a myth and Naberius is like just you wait ho.

Anyway, this brings up a shit-ton of demons descending on the gargoyles cathedral trying to get the journal of Dr. Frakenstein with all his research. The next 15 minutes are in the trailer where gargoyles are flying and killing demons. The CGI-fireball swirling gets old like the animators just copy/pasta everything over and over. When the gargoyles die they “ascend” in a beam of blue Star Trek light.

The demons take Leonore and retarded Gideon giving no regard to humanity trades the journal for the Queen. Adam pursues and gets the journal back but not after he sees what’s going on underground at Naberius’s corporate building. There are tens of thousands of corpses waiting to be jolted alive so that demons may enter their bodies and pretty much screw over all humans. Yippee.

The Gargoyles that turn into humans. As I said…they are quite fugly.

Adam encounters Terra and she’s like omg it’s real. They run away from Naberius and go to Adam’s…apartment? I don’t know, it’s like a run-down hobo building where you can just feel the cockroaches, bedbugs, and rats coming out of the walls. No wonder Adam is so dirty looking. Honestly, the guy needs a major bath. All the scars don’t hide how handsome and ridiculous ripped Adam is (woo! Way to go Eckhart and his fitness regime). Anyway, Terra sews up a boo boo on Adam’s back and they go back to the gargoyles. The gargoyles are pissed off at Adam (I forget why) and they pursue him, but Adam leads them to Naberius’s lair. Ensue more fireball, Star Trek beam ascending and descending.

Adam finds Naberius and they fight it out. Niberius is one ugly mo-fo when he turns into a demon. There’s a dramatic fight scene where all the thousands of corpses are starting to be reanimated. On their chests are computers that show 1%, 5%, etc, to 99% like a computer booting up. The earth’s core rips open and here come ALL the demons entering the corpses.

Naberius holds Adam up and says he’ll lead his demon army as a fireball enters Adam. Some exorcist seizure in the air occurs with Adam until finally he falls to the ground. Lo and behold he didn’t change into a demon because Adam has a soul. Naberius is like da fuq…and Adam hands it to him. Naberius gets jolted with over 15,000 joules of electricity and explodes down effectively screwing over all the corpses that are booting up. Annnd cut.

Then if you remember in Underworld where Selena is all perched on the top of some gothic building spouting off how she’s going to kill everything, well, that’s how I, Frankenstein ends. Adam is on the top of some building vowing to kill demons and be a badass. It sets it up for a sequel, but with how well this movie did at the box office (it tanked) I don’t think that’s going to happen.

This is what happens when the demons get killed. They erupt into a swirling ball of CGI fire and descend back to hell.

Final Thoughts:
Get drunk with your friends one night and go see I, Frankenstein with its repetitive fight scenes, copy/pasta CGI, fugly demons, moody gargoyles, and a ridiculously gorgeous Frankenstein (albeit mangy and dirty). The story line is nothing to praise as it is quite one-dimensional, but it’s a movie to see if you liked the Underworld series. The acting is pretty wooden most of the time but you have the action to make up for it. All in all, it’s not the most terrible movie cough The Legend of Hercules cough but it’s certainly not an award winner.

Jane pretty much hit the nail on the head with this review. Imagine me, as an English student, walking in on this movie and going “huh, well they got that right, this might not be too bad…” and then the demons and angels start fighting and I can almost hear Mary Shelley rolling over in her grave. This might be one of those movies where a great drinking game can come from it, but take it from me, don’t waste money on this film. (Unless you really want to see Aaron Buttchin’s abs). Oh, and definitely don’t watch this movie if you have a paper to write on Frankenstein.