When Man of Steel director Zack Snyder announced Superman and Batman at Comic Con, I was stoked, not to mention completely surprised. Snyder is taking a huge leap with this unexpected, vast decision. After taking some time to sit and mull over this mysterious sequel, all kinds of questions and concerns popped up in my head: How is this going to work? Will it work? Who’s going to play batman? Does this mean I can hope for a Justice League movie? Wait, isn’t it a little soon to bring Batman back? What the heck are you thinking, Zack?

With all of these inquiries about this upcoming sequel, I’ve organized some thoughts in answer to concerns, comments, and hopes that are rattling in Superman and Batman fan bases. As a disclaimer, our fearless director doesn’t seem to know what he’s doing with this moneymaker idea yet. Thankfully, as his first step into the production process, he is reportedly speaking with Frank Miller, author of 1986 graphic novel “The Dark Knight Returns.”

The Superman/Batman logo flashed above the hysterical crowd, and Snyder’s monumental words followed, “What the SHIT was that?!”

The Dark Knight Trilogy will only be three years old when this film is set to release. I wouldn’t consider this a problem if this were, say, Spider-Man. But, most moviegoers would agree that The Dark Knight Trilogy is one of the most revered superhero seriates of our time. They’re the Batman movies of our generation. According to Warner Brothers, this new batman will not likely have any connection with the Dark Knight. A new Batman film will be gladly accepted in 10 years, but barely waiting three years is pushing it. Snyder is taking a gamble by hoping for a positive fan reaction this soon after the Trilogy.

Notice the bat on this Comic Con logo doesn’t at all resemble The Dark Knight Trilogy’s logo, but rather has a more retro Batman look.

It’s hard to imagine Zack Snyder would join the two most famous DC superheroes of all time without expecting big bucks from it. This might inspire him to make the film nothing short of his best, but it could also leave room for laziness. With something this huge, it’s bound to be a blockbuster in the theaters; it doesn’t matter whether the movie is incredible or totally average. The film could be a complete dud and Warner Bros. will still make millions off it. It’s a known fact that the second installment of any series is generally cursed to gain less revenue than the other films, so it could be that Batman was chosen for the second film simply for the money it’s bound to make. This is not to say Snyder won’t do his best work, but it’s possible the quality won’t match its revenue.

There’s plenty of rumors roaming around the internet about who the Man of Steel crew is looking to play Batman, but we know one thing for sure: it’s not going to be Christian Bale. In one sense I’m thankful, knowing that they’re not going to pull some kind of weird Dark Knight continuation. But for me, and many, many young people, Christian Bale is Batman. There’s an entire generation (maybe even two) that have grown up with him as Batman. To some, a new Batman might be exciting and fresh, but for many, I fear the change will not be easily or quickly accepted.

What worries me more than the fact Bale isn’t coming back is the current lineup of possible Batmans. Warner Bros. said they’re looking for someone a little older, “established and rugged,” according to The Hollywood Reporter. A few actors in the mix are Ryan Gosling (Gangster Squad), Joe Manganiello (True Blood), Richard Armitage (The Hobbit), Max Martini (Pacific Rim), Matthew Goode (Watchmen), and Josh Brolin (Gangster Squad).

For having just started the search, this isn’t a bad group, but I’ll be honest, Armitage is the only one I really find appealing for the part. Sources say Warner Bros. have taken a particular liking to Josh Brolin, who is, well, old, and I fear would remind me far too much of George Clooney Batman.

Just look at those nips.

Warner Bros. reported to be in production of a Justice League film, due out 2017. This is actually the only point that I see as completely positive. The classic heroes like The Flash and Wonder Woman will emerge into a new generation, something I know many DC fans have been waiting for. The Flash movie is currently in production for 2016, and as for the other League members, no more heroes have been confirmed. It’s unknown whether Ryan Reynolds will return as The Green Lantern, but considering the 2011 film’s, uh, lack of success, the role of Hal Jordan might be fair game. 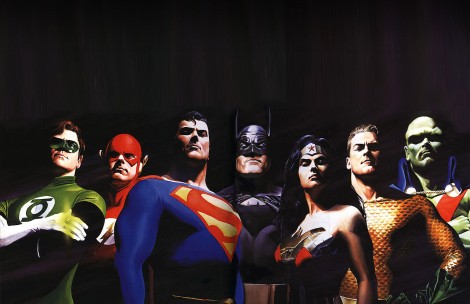 For me, one of the greatest aspects to a Justice League movie is knowing it’ll be nothing like Avengers. Don’t get me wrong, I love Avengers, but a Justice League film has the potential to bring a fresh vibe to superheroes. Man of Steel gave fans a new and very different feel for our most beloved American superhero, being much more sinister and serious than we’ve ever seen him. This could mean we’ve got something off the wall different to look forward to in the Justice League.

Now, all we’ve got left is to play the waiting game.

Until Zack Snyder emerges from his think tank, all we can do is wait and cross our fingers for a cutting-edge, superior sequel to Man of Steel. Superman and Batman, two of the most cherished and revered comic heroes of all time, warrant nothing less.

One response to ““Superman vs. Batman”: Taking a Closer Look”