Path of Exile, a new “online action RPG” from New Zealand-based team Grinding Gear Games, is currently in open beta. While the graphical style and rather outdated-looking UI may seem uninspiring at first glance, the gameplay is anything but. There is a Diablo-esque familiarity to the ARPG that will draw in veterans of the series, but former experience is not necessary for full enjoyment. Besides the standard hack and slash combat, Path of Exile offers extensive skill trees borrowed from Final Fantasy’s sphere grid and Materia system, allowing players to customize their characters with seemingly infinite possibilities. Best of all? The game is totally free to play.

You start the game by selecting one out of six classes for your character. The choices are not novel or bizarre: you are given standard roles based on three attributes (strength, dexterity, and intelligence). How you customize the character through the passive skill tree, however, is where the game shines. If you chose the witch–a mage type–as your class, you can follow a route that betters your melee ability (increases your strength or dexterity attributes), enabling you to be a melee caster. If you regret your decision, you can use your skill refund points, which accrue over time. However, there’s only a small amount available, so decisions on where you put your skill points must be made wisely. 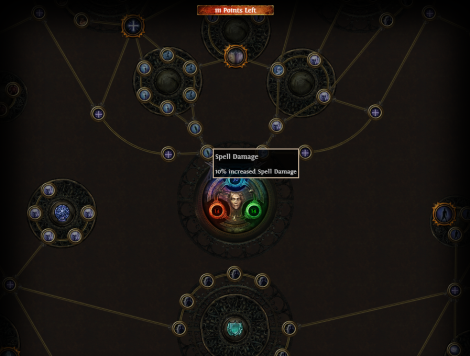 Unlike the Final Fantasy sphere grid system, active skills are not acquired through the skill trees. Spells or melee abilities are learned through various dropped gems around the environment. To acquire the active skill, you must insert a gem in an available socket slot on pieces of your equipment. Attributive spells must go into their respective sockets, so matching colors is a must! But if character class modification wasn’t enough, Path of Exile also allows active skill modification! Through the use of support gems–gems that “link” to the main skill gem–a regular fireball may now shoot multiple fiery projectiles. Adding another support gem to the base fireball gem will double the function.

Finding weapons or armor that have the right-colored attribute sockets for your character can be tough, though. All drops are random (and on a sidenote, the map is randomized each time you enter an area), so the chances of finding that one great dagger with all Dexterity sockets are slim. Don’t fret, though! You must realize by now that Path of Exile depends on its customization. Weapons and armor can be changed and morphed to have their desired properties, but not in the way you might think. The game doesn’t have a currency, instead using a barter-like system to break your goods down into rare items or items that can randomize the socket color of a given object. Though this sort of customization isn’t as easy or convenient as the skill trees or the skill gems, it’s an option nonetheless.

Weapons and armor with sockets are filled up with gems that enable active skills.

Much of the gameplay so far relies on quests, though I readily admit that I have only played up to level 7. Many of the objectives were difficult to accomplish without a friendly helping hand, though I am unaware if being in a party affects quest difficulty or not. If this is not the case, then caster-types beware: killing higher-leveled monsters will be a kiting frenzy. Mobs will attack in random spurts, either individually, in pairs, or in a large group. If being surrounded by mauling zombie creatures sounds like a quick recipe for death, then you are correct! Health is easily lost in these scenarios, but Path of Exile removed individual potion spamming from its repertoire completely. With flasks, you only use a portion of a health/mana potion bottle, and they can be used without consequence until the potion is empty. Fear not, though, flasks replenish on their own, so running away and waiting for regeneration is a smart move. Lesson number one in action games (especially online!): don’t be cocky.

There is a wealth of unexplored aspects to Path of Exile. With it being it open beta, anyone can register for an account to download the game immediately. While it’s not yet available for Mac users (and no Mac support has been announced), Windows users can freely explore and play to their heart’s content. Though the massive amount of players the game has drawn may mean recurring down times and client kicks, it’s just a small hitch.

Path of Exile is an enjoyable new online ARPG that blends old elements and makes it feel refreshing. I recommend trying it–or you can wait for its official release later in the year!

3 responses to “Path of Exile: A Refreshing Online Experience”