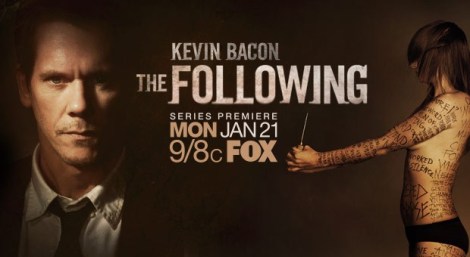 Second week, second episode and so much seems to have happened since the Following premiered last Monday. Warning if you’re not into spoilers, do not venture forward!

Maggie Grace is dead, a naked woman stabbed herself, James Purefoy kidnapped his own son, puppies are dead, romantic tensions are abound in the crazy cult house, and someone gets set on fire. Episode two starts off with a bang as a clearly foolish young girl lets the cop, Jordy, who we know is part of the Following, into her home to check it out. This show wins in its ability to tell a story both with excessive violence as well as without. It plays on the tension built in scenes as Jordy creepily tricks his way into the home and kills all nine girls living there.

Emma is the closest thing this group has to a leader, and she’s definitely off her rocker.

The followers have probably the biggest growth during the episode, especially Denise or Emma Hill (Valorie Curry). Her relationship with Jacob (Nico Tortorella) and Paul (Adan Canto) is the most interesting dynamic. She clearly has developed some of Carroll’s (James Purefoy) manipulative techniques as well as his taste for murder. We see her unflinchingly gut her own mother after her mother makes several mean quips about Emma at the dinner table. 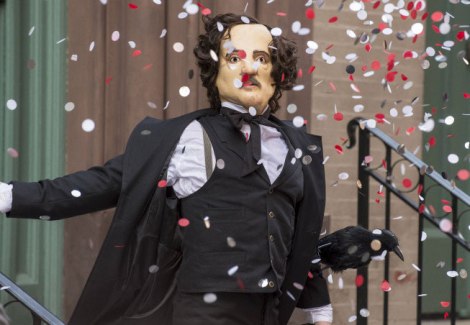 These Poe masks are probably going to be popping up a lot, so I should tell you that they kind of terrify me.

As far as egos go, Carroll’s got a massive one. He’s obsessed with people who love him and immediately take them in as followers. No doubt that’s how he charmed all of those people into his following. He tries to manipulate his wife, Claire (Natalie Zea), but clearly fails and only ends in revealing just how psychotic he is underneath those layers of charm. For him, everything seems to be about a story. His story. That’s why he paired Emma and Jacob together, and no doubt why he then threw Paul into the bundle. It’s not just a story about him, but his own masterpiece. That’s why it was important for him that Jordy dies, it was part of his tale.

I will say though, being an adoring fan of Romanticism and the Gothic Tradition, I can easily see how someone falls for a charismatic guy like Carroll. Hell, I’d be falling for him if I met him and he wooed me with beautiful imagery and depth of language. It’s not hard to see how someone could be lured into Carroll’s circle. He can brings people in and lets them feel like they are a part of something bigger than themselves. While the show lacks in developing Ryan Hardy (Kevin Bacon), Mike Weston (Shawn Ashmore), or really any of the protagonists, the antagonists seem to get center stage. We see them at the beginning and end of every episode, they have countless faces and are willing to do what ever it takes.

That being said, I also want one for Halloween. Also I totally saw this scene coming. You don’t just turn your back on an open door and not expect to be jumped.

The interesting new addition of the FBI specialist on cult behavior leaves a lot to be questioned. Are her intentions true? The last scene with her and Carroll seem to be noting something could happen between them in the future, Carroll clearly sees something in her. That massive poe book looks like it’s just the size for a good cutout gun to fit in there, or a phone, or anything really.

The show keeps me going with it’s characters. The story feels like a large arc of Criminal Minds, which makes me wonder when it will actually end. Can a plot like this go further than one season? Clearly the members of the Following are not smart enough to take up killing on their own, especially not in the same fashion. Also is Joey going to be horribly traumatized after this and take up killing like his father? I have so many questions, they can only be answered next week.

2 responses to “The Following Continues onto Chapter Two”