We’ve just passed the one-year mark since Sherlock staged his fatal fall from the roof of St. Bart’s, and fans of the BBC series continue to wait restlessly for all the answers series 3 will (hopefully) bring. The suspense has been excruciating, but this week, a glimmer of hope appeared at the end of the tunnel. His name is Arwel Wyn Jones. Jones is Sherlock’s production designer, and he’s been making good use of his Twitter account. The teasing began on Monday, with this image of an empty studio. 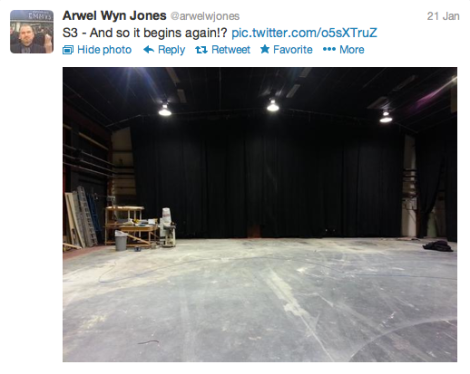 The next day, he tweeted this seemingly innocent photo of an art director at work. But we know our Baker Street wallpapers.

“Who lives in a house like this?” Who indeed, Arwel.

Did I mention wallpapers?

And to close out the work week…

So take a break from cursing Moffat’s name to send some love to Arwel Wyn Jones, Sherlock production designer extraordinaire. It’s not a lot to go on, but it’s more than we’ve had in a good long while. 221B is rising again, so hang in there, Sherlockians!